Read this page in Deutsche.

Joe Melson is a Texas-born singer and a BMI award winning songwriter. Born the son of a sharecropper in 1935, Joe began his life picking cotton in the hot fields of Bonham, Texas and only dreaming of making an impact on the world through music.

At an early age, Joe became fascinated with the vocal styles of the popular artists of his day, particularly rhythm and blues artists, and would study their music for unique vocal techniques. It wasn’t long before Joe was singing and writing songs of his own. He joined his first band at 14 and later moved to Midland, Texas where he formed Joe Melson and the Cavaliers. Joe worked during the day at Standard Oil, and played with his band in the evenings at high school dances and local night clubs. Each Friday afternoon the “Joe Melson and the Cavaliers Show” would air live on KMID-TV. Joe was in love with music and was determined to take his talent as far as the world would allow. 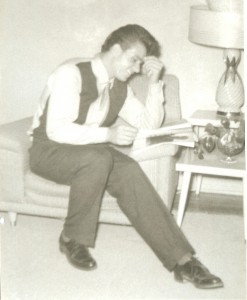 In 1957, Joe Melson’s music and styling techniques captivated a virtually unknown Roy Orbison. Roy heard Joe sing a song Joe had written entitled Raindrops. It was soon thereafter that Roy asked Joe to write songs with him. Joe had already written a song called Cry that Roy was very excited about. Later that same song would launch Roy Orbison’s career into international stardom and debut the vocal style Roy would adopt throughout his career. At the time of recording this song in 1960, the song was renamed Only the Lonely.

In 1960, Joe moved his family to Nashville. It was there, at Monument Records, that Roy recorded Only the Lonely, which became the first operatic rock ballad in the history of popular music. The song went to No. 2 on the Billboard Hot 100 charts in the United States and to No. 1 in Britain. This song also inspired Elvis Presley to record It’s Now or Never. Joe and Roy followed up with songs such as Crying, Running Scared, Blue Bayou, and Blue Angel, which Joe wrote the night his daughter, Michelle, was born.

Joe worked with Roy to shape what became his signature sound and, in the process, created a new musical style: the dramatic rock ballad. Joe Melson’s contribution to the Roy Orbison style, for which he was later inducted into the International Rockabilly Hall of Fame, included the vocal backup figures, the high falsetto voice concept, and the soft voice in the vocal backup singing behind Roy’s penetrating voice. Joe can be heard representing the soft voice style as the lead backup on Only the Lonely, Uptown, Blue Angel, the Crowd, Raindrops, Mama, Lana, the original Pretty Woman, and many more.

Under contract as a writer for Acuff-Rose Publishing, Joe later wrote songs for Grand Ole Opry artists like Billy Walker, Ernie Ashworth, Don Gibson, and Glen Barber. In 1965, Joe wrote Run Baby Run for the Newbeats which became an international hit. In 1967, Joe wrote the comeback song for Roy Orbison entitled Cry Softly Lonely One and used the same styling techniques he used in the beginning of Roy’s career. After many years of pursuing other musical opportunities, Joe and Roy teamed up again in the late 80’s, at the end of Roy’s life, but were never able to finish the great songs they had started.

Joe’s songs have been re-released in the U.S. and in Europe by numerous artists, including Linda Ronstadt, Ronnie Milsap, Glenn Campbell, Don McLean, Lynn Anderson, kd Lang, and many, many others. Joe Melson was inducted into the International Rockabilly Hall of Fame in 2002. At that time, Joe’s songs had over 15 million confirmed airplays in the United States alone, not including airplay overseas where his songs were said to be bigger than Elvis. Fifteen million airplays is equivalent to playing one of these songs continuously for over 85 years.

In 2007, Joe Melson released a CD entitled Joe Melson – The Hickory Records Collection (songs written by Joe Melson, Roy Orbison and Friends). This CD is a compilation of songs Joe recorded in the early 60’s on the Hickory Records label. These songs were recorded during the same era as the classic hits that Roy Orbison recorded at Monument Records. Notable vocal and instrumental accompaniment on this collection is Dan Folger, the Jordanaires, the Anita Kerr Singers, and Roy Orbison on backup vocals, Floyd Cramer on piano, Boots Randolph on sax, Hank “Sugar Foot” Garland, Harold Bradley, and Ray Edenton on guitar, Charlie McCoy on harmonica, and Buddy Harmon on drums.