The Newbeats is comprised of Larry Henley, Dean Mathis, and Marc Mathis. The Newbeats had nine singles and two albums on the billboard charts from the early 1960s through 1970. Joe contributed to the success of the Newbeats in 1965 with the song Run Baby Run, which was a #12 hit in the U.S. and in the top ten in the U.K. 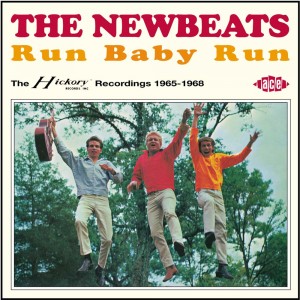 The three members of the Newbeats were friends of Joe’s. Joe remembers the night the trio sat around his kitchen table and sang their biggest hit, Bread and Butter, before it was even recorded.Dean Mathis and Joe wrote another Newbeat song entitled Crying My Heart Out. Joe wrote other songs that the Newbeats recorded such as His Girl, Jingle Jangle World of Love, Little Child, and Michelle DeAnn. And best of all? Joe still stays in touch with his Newbeat friends!

Some of the songs on Joeâ€™s Hickory Records Collection were co-written with Dan Folger. Dan is a great writer and performer. He started out writing and jamming with Joe and Roy Orbison in the very beginning in Midland, Texas. He and Joe wrote Any Little Thing (Can Start The Flame of Love), His Girl, and Stay Away From Her, among others. Dan also sang second lead vocal on some of Joe’s recordings. In all Dan and Joe wrote 11 songs together in the early 60s. Dan went on to play in several rock and country bands. His most famous work was The Way Of The Crowd. We are saddened to report that Dan passed away in March 2006.

Yes, even Joe Melson made it into the outlaw country scene! Waylon Jennings, one of the original country outlaws, started his career by playing bass for Buddy Holly. With beginnings in that rockabilly scene, there is little doubt why Waylon would be attracted to the songs of Joe Melson and Roy Orbison.

Joe wrote songs like Why Don’t Ask Me Why for the late Billy Walker, Suzie for Sue Thompson, and The World You Live In for Glenn Barber.

Fellow singer/songwriter Willie Nelson has more than one display case of Joe’s accomplishments and achievements at the Willie Nelson General Store in Nashville, Tennessee. If you are ever in “Music City USA,” take a moment to look them up!